Hi, I do not know how to rename a .jpg. Sometimes I would like to change one picture because a mistake or better understanding, but I could not see how. Thanks --Oni no Pikachu 21:11, January 11, 2011 (UTC)

What I usually do is use the move function. It may or may not be available to you, as I'm an admin. If there's an incorrect image name, then just upload it correctly and use the {{Delete}} template on the incorrect image. --Majushi 08:54, January 12, 2011 (UTC)

Due to some recent confusion on the history and mandates of the Tortoise Clan, (and since I am in both the living campaign, a home game, and the FB game, in addition to card playing)... I thought it might be good to update the content with some additional information from AEG sources. I was planning on putting a "references" section at the end of it, so people who are truly intersted could go get the books and read it for themselves.

In the meantime, I'll just add what little extras I have, and hope the formatting turns out ok.

Hey, So long as you cite your references for all added information, and that it comes from official sources (rpg, ccg, aeg officials), then that's fine. --Majushi 11:23, February 5, 2011 (UTC)

Hi! I have had problems with the image function. I want to add a new picture to a previous one, updating the image (a better quality picture, for example), but the picture the program takes was not the one in my computer, it kept the previous one. Please check the Dragon of Water.jpg and you see what I am trying to explain. I have a nice full picture art instead the CCG art but the program refuses to work as the previous monts did. Even overwriting the picture did not erase it to add the new one. Let me know where is my mistake. --Oni no Pikachu 22:14, February 14, 2011 (UTC)

There's not much I can say to help here. Sometimes the images here take a while to update, and I've struggled with it myself. It might be something as simple as refreshing the image or using Ctrl+F5. The other thing I could suggest is clearing your history and cache. That could help refresh the image. If you have a look on wikipedia forums I know there are people who have the same problems occasionally. Sorry for not being able to help too much. --Majushi 08:07, February 15, 2011 (UTC)

I have done from other computer and it did not help. Any time I put a new version for an image, the system creates another equal to the old one. Even every attempt to revert to another image previously loaded, the program created a new file picture in the log. I will stop to load pictures with the same name for a while. It is a pity because I have collected several nice pictures to replace those which came from CCG cards. Oni no Pikachu 11:09, February 15, 2011 (UTC)

It is a shame. There's nothing I can do to help I'm afraid. It was doing the same for me a while, and still does occasionally. My best advice is going on the wikia forums and seeing if anyone has solved the issue. Alternatively, it could simply be a wikia issue and out of our control. What I will say is that the image you upload is still there, but you're just seeing an old version instead. Other people, who haven't had the page load previously will see the new image (i think). --Majushi 11:46, February 15, 2011 (UTC)

I just wanted it to be noted that the Otaku Kamoko and Utaku Xieng Chi pages need some serious writing and grammar corrections. I'm new to editing wikia pages, so I don't know if there was a way I could flag them for editing instead of leaving a message here. I would fix them up myself, except that I don't feel comfortable enough with the info or writing (or have the time to do so).

Anyway, thanks for taking time to read my message. Thanks for all your hard work on the wiki! This is my favorite wiki to read. :P

Hey. Noted. My main problem at the moment is that I've not got the time day to day to patrol all the recent changes. If you come across anything like this and don't feel you want to handle it yourself then telling me is the next best thing I suppose. There are probably many articles currently suffering a little from poor grammar, and I can't find them unless I randomly end up on the pages. Hmmm. I've created this template now: {{Speacial Cleanup}}. Use this to get my attention on pages you think require Cleanup. The only thing I ask is that you keep in mind that millions of articles will take forever to check. Use it sparingly at first. See what I've done on the two you've mentioned above. --Majushi 22:59, February 22, 2011 (UTC)

Guys, I actually patrol randomly the pages from time to time to clean grammar, typos and even poor style. I can concentrate on it more if you want. Alphast 09:52, February 26, 2011 (UTC)

When you modified the pictures, or put a "talk" message on them, I could not follow the modifications. When I checked inside recent changes this kind of things, photo changes do not appear in the log, except renaming. I could only see them the first time each day I enter in the wiki, in the page which gives welcome, explain a bit of the clans, races, ... and "Recent Changes". There I could see it, but not anymore.

Ah. It may be worth, every now and again, to simply search the recent changes by Talk pages only. In the Namespace drop down menu select; Talk. (or file talk) Should show only talk pages edited. I do it every now and again to see if anyone is having a discussion about something I should weigh in on or not... --Majushi 11:18, July 12, 2011 (UTC)

Hi! I'm Mark, from Wikia's Content Team, and I'm here to help out this wiki! First of all, I'd like to say that this wiki is in an amazing shape! It's great to see a wiki thrive like this :)! Though I think the wiki could do with a makeover. Right now, the default "Oasis" theme is being used. I'd like to add a custom theme, wordmark and mainpage to the wiki which'll make navigating easier and also attract new visitors. What do you say? You can leave me a message on my talk page! Cheers, Mark (talk) 22:11, July 23, 2011 (UTC)

The skin in black is a great difference. I could not say it is better, because I am too much conservative. I will miss the previous style for a time, until my eyes would be confortable with the new one. I suppose it had improved the general aspect. Changing is part of the life. ;) --Oni no Pikachu

I agree. I'll just have to get used to it. I would say that the images are ok, but the right one seems a little blurry in a way. The Argyle are on the left is very crisp and something equally crisp should probably be on the other side. Will look into what I can do style-wise on the wiki. --Majushi 21:00, July 24, 2011 (UTC)

File:Wiki-background5.jpg looks good to me. Is there ways of having different backgrounds rotating, so that we have a few images of different clans that people can see? --Majushi 07:36, July 25, 2011 (UTC)

Fair enough. That will do though. The other main issue I'm coming across is a lot of templates were set to a lighter background. I'll change them as I come across them, but if you guys could do the same then I might not miss any. --Majushi 13:08, July 25, 2011 (UTC) 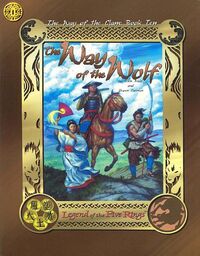 I uploaded Dairya 5.jpg but it should be deleted, or modified by a true one. Dairya had a glowing aura as if a returned soul being, but the image had never appeared in that way. It had been photoshopped, adding the aura and the card frame like. But this image came from Way of the Wolf. So I prefer to delete it, its like a fan art. --Oni no Pikachu 16:13, July 25, 2011 (UTC)

Done in all troll-and-toad links. I tried your way before, but it seemed not work. Surely I did not hit the corrected one because now it works. --Oni no Pikachu 11:43, September 5, 2011 (UTC)

In 1173 Nobumoto died and his sister Fusako was appointed as Daimyo. I know that currently timeline is another, but just better to mention for your page of faces. --Oni no Pikachu 15:54, November 11, 2011 (UTC)

Clan of the Month: Kitsune Tsuke vs. Kitsune Akizuki Edit

I answered your question in my talk page. See below brief explanation about two card with the same picture in the web. --Oni no Pikachu

If you would be so good as to credit the Shugenda illustration of the ladies to me, I would appreciate it.

I was made aware of the existence of this artwork via Shinden Fu Leng. An L5R artist, Genzoman, published it on his DeviantArt page. He said that it was for L5R, but didn't say whether it was intended for a card or some other project. - AudaxDarkScribe 02:42, February 14, 2012 (UTC)

I would say that unless we can confirm it's actually going to be released, that we can't leave it up here. As much as it's awesome art, we can't put unreleased art up here until we know more. --Majushi 09:20, February 14, 2012 (UTC)

Reading Winter Court Kyuden Seppun last night, the source doesn't mention him being champion/daimyo. Only "representative" of the Falcon Clan. I wonder if Way of the Minor Clans might have more info on him. It's worth checking there before completely ruling him out as a champion. --Majushi 10:09, March 19, 2012 (UTC)

I am the Lead Administrator of the Warhammer 40k Wiki. This insane individual dropping curses on my talk page here is a troll who was banned from our wiki. He simply looked at my message wall on the Warhammer 40k Wiki to see other wikis I have contributed to so he could further attack me after our Admins banned him multiple times. This is not a discussion I have invited or participated in here and I have no control over his actions. I have always been a fan of your wiki, which is why I contributed here some motnhs ago, and I apologize for his decision to try and attack me on yet another wiki. But unless you ban him here, it will likely continue. This is why I have not responded and have no intention of doing so. If you would please wipe the offending material from my Talk page, I would greatly appreciate it, as I fear any actions I take will only incite him further at this point. Thank you and sorry for the spread of this mess. Montonius (talk) 10:04, December 13, 2012 (UTC)

See my message in Talk:Ra'Shari. I remember that once I wrote something about that matter, but finally it was discarded because it came from a non-canon source. Now appears again, but I see no way to make it good. Maybe I can find another sources on this topic. Oni no Pikachu (talk) 22:20, December 15, 2013 (UTC)

i am a l5r player of china.i want to translate this site with chinese.how can i do it?thx!

Retrieved from "https://l5r.fandom.com/wiki/User_talk:Majushi?oldid=253265"
Community content is available under CC-BY-SA unless otherwise noted.