Toshi Ranbo wo Shien Shite Reigisaho, Violence Behind Courtliness City, became the capital city of Rokugan in 1160 after the Fall of Otosan Uchi in 1159. It was commonly referred to simply as "Toshi Ranbo".

In 437 the Akodo family created Toshi Ranbo as the northernmost holding along the shared Lion-Crane border, near the Kintani Valley. It was intended as headquarters to coordinate the Akodo military efforts against the Crane. [1] The fortified keep and a series of outbuildings were recorded with the name of Toshi Ranbo in the Imperial Histories, while the Ikoma Histories made reference to Kita no Yosa, Northern Fortress. [2]

In 598 the city was assaulted by the Crane who held it for eight days. The Lion began fortifying the city heavily. [1] The next Crane assault, in the year 600, failed, with the Crane suffering heavy losses. However, a subsequent Lion offensive in the year 601, directed at the Kintani Valley, was driven back by the Crane. For five centuries, [3] the city was fought over by the Lion Clan and the Crane Clan. The common folk had been forced to do what they could to survive in a city frequently consumed by war. As a result, the city was riddled with hidden rooms and escape tunnels, where refugees from the current regime could hide until friendly forces ruled again. [4]

In the early 12th century Toshi Ranbo was more of a traveling village, consisting of seven buildings, a row of merchant booths, and a waystation within one self-contained section of the fortress. All of the structures were made of stone and wood. [5] The name Toshi Ranbo wo Shien Shite Reigisaho (Violence-Behind-Courtliness City) had been already applied after the city had become a focal point for Rokugani politics. [2]

In 1118 the Tsume Daimyo Doji Retsu launched a vicious attack out of his holdings in the Kintani Valley, [3] seizing Toshi Ranbo in a daring and violent incursion that destroyed the Goseki family. [6] In 1120 the Lion Clan Champion, Akodo Arasou, and his betrothed, Matsu Tsuko, attempted to retake the castle but, despite their valor, Arasou was killed and the Lion were routed by a smaller, well entrenched Daidoji garrison. [7] Tsume Retsu handed command of Toshi Ranbo over to another Crane general and retired to Kyuden Kyotei. [8] The Lion succeeded in recapturing Toshi Ranbo, only to lose it again to the clever political machinations of a Crane general named Doji Chuto, who in 1120 [3] politically outmanouvered the castle's Lion Lord, who left Toshi Ranbo, allowing Chuto to claim it again as a Crane holding. Rumors of blackmail by the Crane general spread. [9] This year the city wall was expanded for the first time to encompass those buildings that had been built outside of the city walls. [10]

In 1123 [3] a Scorpion plot raised the tensions between the clans during peace negotiations, involving the Legacy of the Forge, toshi spirits of Toshigoku, provoking the Battle of the Forgotten Tide. [12] Toshi Ranbo was seized by the Crane, [13] to be later lost in 1126, seized by Matsu Gohei. [14]

This year a group of disillusioned ronin began patrolling the city, and they were known for their weapon of convenience, the Tessen. [1] The Crane had been concerned that the war-weary populace might revolt against both sides, and had issued an edict forbidding any non-Crane residents to bear weapons within the city. Many ronin had been angered that the endless war between Lion and Crane left their samurai little time to keep the streets safe. They had organized themselves, assuming the role of vigilantes and carried the iron fans that were their namesake, the Iron Fans, in the place of forbidden swords. [15]

Retaken by the Lion Again Edit

The city was in Crane hands in 1153 when Matsu Nimuro retook Shiro no Yojin with minimal losses from both sides. The Crane slandered the Lion Clan Champion, claiming his attack was full of subterfuge and trickery. As a rebuttal, Nimuro gave complete details of his plans to retake Toshi Ranbo in front of the entire Imperial Court. The Daidoji were completely outmaneuvered despite knowing their opponent's strategy, and Toshi Ranbo fell back into Lion hands. [16]

In 1159, when the Lion Clan were distracted by the conflict with the Tsuno and troubled by Shiba Aikune's assault, the Crane Clan engineered a plot in Toshi Ranbo to excuse a military intervention. [17] They provoked several riots with the secretive Daidoji Harrier units. [18]

Daidoji Gudeta led an army of Crane to besiege the city, [19] while Kakita Nakazo marched into Toshi Ranbo as its protector, citing the Lion Clan's inability to protect it as justification. Hantei Naseru intervened to arbitrate a diplomatic solution, eventually deciding in favor of the Crane Clan due to the incompetency of the Lion in avoiding the riots. [20] [21]

The continuing conflicts between the Lion and Crane ended with the unlikely alliance between the two Clan Champions Matsu Nimuro and Doji Kurohito. [22] The new capital of the Empire was decided in 1160 in the Imperial Court at Kyuden Miya. Doji Kurohito informed the Court that the Crane had already begun construction, as a form of penance for the distraction from his duties caused by the Yasuki issue. Toshi Ranbo was under Lion custodianship at that time, but Matsu Nimuro joined the Court and confirmed the location and their united effort with the Crane in improving the city. Nobody among the Court said a word against the plan. [23]

When it become the capital, Toshi Ranbo was growing faster than any other city in Rokugan despite some setbacks, most notably the Fires of Toshi Ranbo. In a few more years the capital would be the same size as Otosan Uchi was. The Imperial Families were the first to establish estates, but the Great and minor clans soon followed. Over  the course of  the next several years,  the city walls were torn down and rebuilt repeatedly as Toshi Ranbo expanded manyfold. [24] New Doji estates were built, becoming well known throughout the Empire for their beauty and serenity. [25]

Unknown to the Rokugani, the city had a tunnel system beneath the old part of the city. The nezumi used it, but they were very narrow to dwell within. [26]

In 1165 the city was ravaged by a fire in the side controlled by the Lion Clan.  Most of the damage happened in the most recently constructed city section, the one that had not yet been named or granted a governor. [27] The fire had begun in a warehouse which had Black Powder inside. [28] The Crane and the Lion were outraged and began independent investigations without much progress. [29] After the Rain of Blood the investigations were halted for a year. In 1166 the Lion gave all the information they gathered to the Crane, and the Crane patroled the City as well as they investigated. [30]

In 1169, the city was heavily damaged following an attack by the armies of Unicorn Clan Champion Moto Chagatai. The battle culminated in a number of important figures being killed. Kaneka fell to the Khan after being distracted by his half-brother, Isawa Sezaru, who appeared over the city and started to rain destruction. Sezaru was killed by his wife, using the final remanent of Isawa's Last Wish. Bayushi Kaukatsu was killed by gaki while observing the battle from a balcony of the palace. [31] The merchant's quarter remained little more than a smoldering crater. [32] After six months, there was no sign of the massive damage that the city had suffered. [33]

The Phoenix Clan controlled the city from the end of the Battle of Toshi Ranbo until they ceded its control to the Imperials in the Month of the Dragon in 1170. The Otomo thereafter appointed the Phoenix Clan custodians of all sacred sites within the Imperial City. [34]

In 1199 Toshi Ranbo was selected to held Winter Court, during the months of Hida, Togashi and Fu Leng, [35] hosted by the Imperial Regent Utaku Zo Sia. [36] In the final day of the event a yojimbo was revealed as a shapeshifter oni. It rampaged through several districts of the city until the demon of Jigoku was destroyed. [37]

Seized by the Spider Edit

In 1200 the rebellious Spider Clan led by Daigotsu Kanpeki seized the Imperial City. The Emperor Iweko II and his family were secured to continue the fight from safety. [38] The Spider left the city shortly after, and the Emperor and the Imperial Court returned. [39] 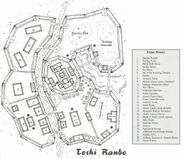 Toshi Ranbo, beginning of 13th century
Add a photo to this gallery

Retrieved from "https://l5r.fandom.com/wiki/Toshi_Ranbo_wo_Shien_Shite_Reigisaho?oldid=277778"
Community content is available under CC-BY-SA unless otherwise noted.