The Castle of Vigilance (L15) was located in the Lion-Crane border, beside the Shadowed Souls River, [1] in the Yojin province. [2]

The castle laid in the eastern edge of the Plains of Battle, just two miles from Shiro sano Kakita, the Kakita Dueling Academy. It was also only a day's travel from Otosan Uchi, making it one of the most strategically important castles in the Empire [3] until the Fall of Otosan Uchi.

The castle was not a massive fortress, nor was it easily defensible. The nearest Lion reinforcements must come from Shiro Akodo, thirty miles away. The structure stood over eighty feet tall, with seven interior levels including one underground, rising over a hundred feet above the river along its back side. The castle was built upon a carefully engineered earthen mound, and the single path that led to the gates passed between two watchtowers. [4]

The fortress fell into the hands of the Crane along with much of the Yojin province. Lion armies marched to avenge the slight, [6] retaking it during the Night of Falling Stars, in 960. Since then the castle had changed hands more than once, but the Lion retained it, despite the efforts of many Kakita officers. [7] [8] [9]

It was said that the river below the castle was haunted by the spirits of those who died there. Once a year, on the seventh day of the month of the Snake, the Lion barred the gates to the castle. That night the spirit of Daidoji Yurei walked the plain outside the castle, and tore any Lion he found to bloody shreds. Since the Lion had held the castle only seven had been outside on that night, but all were found in pieces in the morning. [10] The ghosts of the castle prevented anyone from occupying the uppermost floor. [4]

Legacy of the Forge Edit

In 1123 [11] the traitor Kitsu Goden and the instigator Bayushi Sozui unleashed the Legacy of the Forge to raise the tensions between Lion and Crane forces, [12] which led in the Battle for Shiro no Yojin, [13] and the holding was again in the Crane hands. [14]

Daidoji Uji seized the castle [15] in 1132, following the guide of his ancestor, Daidoji Yurei, against the orders of the Crane Clan Champion, Doji Kuwanan. [16] It was the beginning of the Crane Civil War. [17]

Back to Lion Hands Edit

In 1153 Matsu Nimuro sacked Shiro no Yojin with an army of Akodo with terrifying precision, minimizing losses in both sides. [18] In 1159 Matsu Masahide was its governor. [4]

Stormed by the Crane Edit

In 1200 the Lion claimed the northern portion of the Kintani Valley fell within the purview of Seizuka Shiro, and the Crane were forced to vacate Kyuden Kyotei. Shortly after Shiro no Yojin was stormed by Crane forces under the command of Kakita Ujirou. The Lion relinquished their claim, and both strongholds were returned to their former owners. [19] 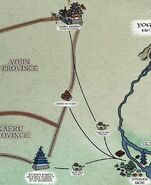 Levels 1-6
Add a photo to this gallery

Retrieved from "https://l5r.fandom.com/wiki/Shiro_no_Yojin?oldid=278925"
Community content is available under CC-BY-SA unless otherwise noted.