Last Glance Castle (D10) in the Toshibu province, [1] was the ancestral home of the Mirumoto family, it was built on a sheer cliff overlooking a pass through Great Wall of the North. The only road spirals upward through a ravine under the watchful gaze of the castle, and any who wished to visit had to climb the steep, winding path. Invaders had to brave a gauntlet of arrows, pitch and fire from above, with no way to retaliate. [2] [3]

The construction of Shiro Mirumoto was begun at the dawn of the Empire, by order of Mirumoto himself. Alas. Mirumoto died on the Day of Thunder in 42, and was never able to see his home finished. His adopted son, Mirumoto Hojatsu, continued the work but was forced to have the site of the castle moved because of the limitations of the previous site. Hojatsu also died before the completion of the castle, dying in a duel with his father's rival Kakita. Every Mirumoto Daimyo since Hojatsu has known Shiro Mirumoto as their home.[4]

The castle's sole purpose was to house the family's leadership and provide a central location from which to coordinate the clan's militaty endeavors. [5] As was typical for the Dragon, Shiro Mirumoto was not a lavish family estate nor a massive fortress. It was exactly what the Mirumoto required, and nothing more. As the ancestral home of the Mirumoto family it housed the largest dojo for the students of the Niten style in the empire. It contained the largest barracks for the forces of the Clan, and was always fortified and victualed in case of siege. The castle itself was rather spartan in appearance, but it was stark and functional. Its greatest defense was its was remote location and formidable approaches, being situated in nearly inacessible mountainous terrain. [4] A great Crane poet, upon traveling to the remote castle, once called it "the least impressive reward for the most difficult mountain climb in all of Rokugan." [6]

The castle was the home of the Mirumoto Daimyo, and as such the Daimyo was the governor of the castle. When the daimyo was Mirumoto Mareshi ceeded most of those responsibilities to his wife Mirumoto Kei, due to a lack of faith in his own abilities to lead the family. In their absences however, the duties of managing the city fell to Mirumoto Hojatsu or Mirumoto Bokkai. [4]

The castle was equipped with archetypal equipment needed to withstand cold winters in the mountain. It housed enough supplies to feed a large number of troops for an extended period of time. The barrack space however limited the castle to housing no more than a quarter of the entire Dragon Clan Army at a time. Contained within the castle is the Path of Hojatsu Dojo. Also, within sight of the castle sat the Iron Mountain Dojo. It was constructed on the site of the original Shiro Mirumoto, and it was considered one of the most prestigious dojos in the Empire.[7]

At most times the castle contains some of the Dragon Army. These would be the First through Eighth Legions, and the Twenty-seventh Legion (Nightingale Warriors). In addition to the legions there are approximately two thousand Mirumoto students at any one time and about one hundred sohei in the area. [8]

The Great Study was a gigantic chamber that laid beneath the castle built centuries ago to have a secure hold in the event that the castle came under attack. [9] In 1120 Kitsuki Yasu built a prison of crystal to contain the Kitsuki Kaagi's Journal. [10] [11]

In 664 during the Great Famine the Emperor Hantei XX held his winter court at Shiro Mirumoto, to see with his own eyes the Dragon Clan Champion Togashi Toshimasa, who had been secluded in meditation for more than three years. The few food reserves of the Dragon were depleted to feed the guests, leading in starvation of many peasants and ji-samurai over the winter. [12]

In 509 the Lion Clan Champion Akodo Meikuko under the influence of the Bloodsword Revenge attacked with 20.000 men the Togashi Mountain. In the Red Snow Battle only two thousand survived and Meikuko committed seppuku. [13] [14]

In 1115 Mirumoto Hitomi held the Imperial winter court. During the event Hitomi killed Shosuro Nimuri to protect the true identity of Togashi Hoshi, who Nimuri had seen in his true dragon form. Mirumoto Miyoki, cousin to Hitomi and daughter of Mirumoto Sukune, was exposed as the culprit to protect her Lady from dishonor, and became an outcast. [15]

Shiro Mirumoto was one of the three minor Strongholds which the Naga took in 1131 during the Siege of Sleeping Mountain. The Hitomi's followers took their lives rather than surrender. Hoshi and Qamar were horrified at the fanaticism of the Dragon loyalists. [16]

In 1161 the Mirumoto Daimyo Mirumoto Uso was murdered in his private chambers in the castle, and since then the security had increased even more, making it a virtually impregnable fortress. [3]

The War of Dark Fire Edit

In 1171 the Army of Fire laid siege to Shiro Mirumoto. Mirumoto Kei's forces were scattered throughout the Dragon lands fighting the Yobanjin invaders so Shiro Mirumoto was surprisingly vulnerable. A Wyrm, enhanced by the Dark Oracle of Fire's powerful magic was used to blast a whole in the walls of Shiro Mirumoto. The Army of Dark Fire poured into the breach, but Mirumoto Kei led a countercharge to push the Yobanjin back outside the castle walls. [17] When reinforcements led by Akodo Shigetoshi arrived a few days later, they found that although Shiro Mirumoto had taken tremendous damage, Kei's countercharge had successfully won the day and driven off the invaders. This victory was short lived, as instead of retreating, the invaders went around Shiro Mirumoto and assaulted Shiro Tamori instead. [18] 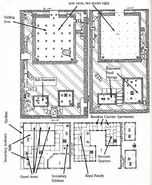 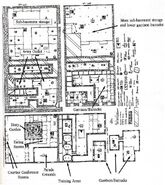 Shiro Mirumoto: Tenshukaku
Add a photo to this gallery

Retrieved from "https://l5r.fandom.com/wiki/Shiro_Mirumoto?oldid=228697"
Community content is available under CC-BY-SA unless otherwise noted.