Shiro Kuni (CB11), also known as the Castle of the Land [1] or Castle of the Nation, was the heart of the Crab Clan's defense against the Shadowlands, [2] within the Adauchi province. [3]

The huge castle lacked the high towers and keeps of other Crab castles, instead being essentially a giant fortified barracks. [1] It accomodated an entire army, and commanded an imposing view on the surrounding countryside. This was where the Crab generals would plot their strategies, and many messengers were on hand to relay orders to the entire length of the Kaiu Kabe. There was always a small army of bushi stationed here, who served as an anchor for the wall, and were a deterrent to any Shadowlands creature that perceived the castle as a weak link in the Crab defenses. [2] [4]

Shiro Kuni was built to replace the ancestral place of the Kuni, Kyuden Kuni, which was lost during The Maw's attack. [5] It was located in the center of a dead, twisted wasteland, the Kuni Wastes, which tended to give it a rather sinister feel. [6] The castle sprawled and was not easily defended. It was large, but its defensive works were not terribly imposing. It served as a command and communications center, and the headquarter of the Reserve Army. It was garrisoned with the Fourth through Sixth Legions of the Third Crab Army. [7]

Shiro Kuni also housed the major Kuni Laboratories, where the Kuni would research the Shadowlands in their search to catalogue their enemies. [6]

For further information on this section, please see Kuni Laboratories

The Kuni Library contained extensive records on the Shadowlands, the nature of oni and evil spirits, and the secrets of maho. [8]

For further information on this section, please see Kuni Library

Barracks of the Damned Edit

Not far outside the walls of Shiro Kuni were the nondescript buildings that housed the Damned. [9]

For further information on this section, please see Barracks of the Damned

In the year 526 Shadowlands creatures mounted their largest assault yet on the Crab lands. The Siege of Shiro Kuni lasted for several months, until a rag-tag force of monks of the Order of the Five Rings and heimin followers of its leader Gorinno appeared upon request of Kuni Daimyo Kuni Watabe, helping break the siege at heavy cost. [10]

In 1118 [11] the Shadowlands launched a massive assault on Kuni castle, nearly obliterating the forces there in the Battle of Twilight's Honor. [12]

In 1171 during the Destroyer War the castle was under the attack of the Destroyer's horde. [13] Despite the aid of Dragon and Phoenix forces, the castle defences were breached, [14] and the defenders overrun [15] in the Fall of Shiro Kuni, in the month of the Dragon of 1172. [16] 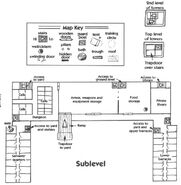 Sublevel and Towers
Add a photo to this gallery

Retrieved from "https://l5r.fandom.com/wiki/Shiro_Kuni?oldid=228397"
Community content is available under CC-BY-SA unless otherwise noted.