The Bayushi family Palace (S10) in the Kunizakai province [1] was also known as Silk and Shadow Palace. [2] It was located just south of the former crossroads of Rokugan, Beiden Pass. After the Clan War, it was entirely rebuilt, returning it to its former glory as one of Rokugan's finest palaces and home to many extravagant court sessions. The infamous Traitor's Grove was located to the south of the castle, but none other than Scorpion had ever dared enter, even after the Scorpion Coup. [3] [4]

The palace was built atop a low plateau in the center of an open plan, making it impossible for hostile forces to approach undetected. [5] It was one of the three most extravagant fami­ly palaces in the Empire (the other two being the Doji palace and the Mantis Clan palace). It was also guarded by one of the largest standing armies in Rokugan. [6]

Bayushi's Labyrinth enclosed the circumference of the palace. It was designed in part by Kaiu, who modified the labyrinth so only the Bayushi knew its secrets. It had pathways that actually moved and walls designed to confuse and disorient. The maze, during peaceful times, had been used as a sort of tourist attraction, to test the mettle and cunning of those who would seek to visit the palace. The guards did know how to circumvent the maze for those who would rather just travel to the castle without a test. In times of combat, the guards could activate the deadly traps inside the Labyrinth with a switch. Deadfalls with spikes, explosive magical wards and crushing walls were but a few of the deadly weapons in the maze. [7]

Another impressive feature was its huge extremely well-maintained gardens, containing may shadowy recesses where private discussions could take place. Ancestral shrines were spread throughout the gardens, dedicated to the most public and prominent Scorpions, as Bayushi Tangen or Bayushi Shoju. [8] The gardens included an artificial lake, innumerable flowers and sculpted trees. [9]

A lake underneath the palace, this was the place where Bayushi departed from the mortal coil. At the end of the War Against the Darkness, both Bayushi Kachiko and the Shadow-corrupted Shosuro came to this cavern, where Bayushi's spirit combined their souls and gave peace. This lake was a passage to the Realm of the Dead; Meido. In truth, Bayushi didn't die, but retreated to the realm to watch over his clan and wait for the day when Shosuro would return to him. Although Bayushi was in both realms, his presence in Meido had rendered his mortal realm presence insubstantial. When he appeared above the lake, in a terrifying spectre, his wisdom was advisable to heed. [7]

The land of barren trees, Traitor's Grove, Hayashi no Uragirimono, was the home of the betrayers of the Scorpion clan. The traitor's soul was bound permanently in a tree, and as the tree grows, the soul was cut and crushed by the bark. The branches were graced by the possessions of those who had found their homes in this grove, and the wind sang sadly of the moans and cried of the imprisoned, accompanied by the dulcet tones of the weapons, armor and masks. It was inadvisable to steal from this grove, as they risked the curses of the Bayushi family. A single shugenja presided over this grove, not to act as a guardian, but to ensure the trees were healthy and strong so the captive souls would never escape. [10]

The Scorpion Clan Champion Bayushi Daijin was haunted after he spoke to the prophet Uikku, and became mad. Daijin escaped into the Bayushi's Labyrinth, never to be found again. The Prophecies of Uikku were placed in a secret chamber beneath Kyuden Bayushi and forgotten. [12]

After the fall of the Gozoku the Scorpion began to rebuild their position. In 438 the Shosuro Daimyo's daughter and Kaiu Daimyo's heir were married as part of a Crab-Scorpion alliance. The efforts gained the Winter Court of this year to be hosted at Kyuden Bayushi. [13]

In 812 winter court was held at Kyuden Bayushi during the reign of Hantei XXII. The Scorpion had the upperhand in the court, and managed to orchestrate a conflict between the Asako Inquisitors and the Kuni Witch Hunters. [14]

After the Coup[edit | edit source]

After the failure of the Scorpion Coup Kyuden Bayushi was put to torch by the Scorpion before the Imperial Legions plundered their wealth and secrets. [15] It was used as a hidden stronghold by Soshi Bantaro, who used his magic to appear the place haunted. [16] Bantaro's experiments to return Bayushi Shoju to life made the Shadowlands Taint grew very powerful. Gaki were noticed prowling the area and weapons and armor had gone missing from Traitor's Grove. [17]

In the first month of 1128 a thousand-foot plume of green flame erupted near the ruins of Kyuden Bayushi, but the investigating Imperial Legions found no trace of fire. It was considered a bad omen. [18]

In the year 1166, the Righteous Emperor Toturi III declared that his winter court would be held at Kyuden Bayushi. Among the more notable events during this court was the introduction of Daigotsu Soetsu to the court by Hida Kuon and Hida Kisada. Soetsu attempted to convince the Emperor to allow the followers of Daigotsu to be recognized as a Great Clan, but Toturi III, naturally, rebuffed all of his arguments. Unknown to Soetsu, Kisada and Kuon planned to use the Lost to aid them in the final, ultimate destruction of Fu Leng and the Shadowlands. [19]

Winter Court in winter 1169-1170 was held several different places throughout the Empire because of the recent turmoil and lack of Emperor. Kyuden Bayushi was one of the hosts, and entertained notable guests including Scorpion Clan Champion Bayushi Paneki and Ide Daimyo Ide Tang. [20] Master of Earth Isawa Emori also spent winter at Kyuden Bayushi. [21]

After the appointment of Bayushi Hisoka as Imperial Chancellor following the Celestial Tournament Kyuden Bayushi was selected to host the first Winter Court of the reign of Iweko I. [22] 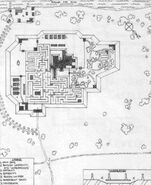 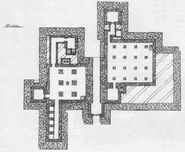 Upper levels of Kyuden Bayushi
Add a photo to this gallery

Retrieved from "https://l5r.fandom.com/wiki/Kyuden_Bayushi?oldid=229646"
Community content is available under CC-BY-SA unless otherwise noted.