The Kaiu Wall, also known as the Carpenter Wall or the Kaiu Miracle, for centuries was the very physical demarcation of the southern border of Rokugan. On its north side lie the lands of the Crab Clan, and on its south the River of the Last Stand separated it to the blighted reaches of the Shadowlands. [1] It was here that the forces of Rokugan entrenched themselves in their eternal battle against the forces of Jigoku.

Burden of the Crab[edit | edit source]

After the Day of Thunder the first Emperor, Hantei, commanded the Crab to build a great wall between the Empire and the Shadowlands and to guard the Empire from its evil. [2] The original wall was built by Hida at the behest of Hantei, and it ran along the southern Hiruma border. [3] In the year 516 it was accounted an attack of oni working together, and the assault lasted for a decade. [4]

The original wall was destroyed when the army of The Maw invaded Crab lands. They also stormed the Hiruma Castle and seemed unstoppable. [3]

The Army of The Maw was stopped at the Seigo River by Kuni Osaku, who raised the waters of the river into a wall via a magical ritual. Kuni Osaku was able to keep the magic of her ritual flowing for 73 days by using her own lifeforce to power the spell. Meanwhile, the Crab called in all the favors owed to them and requested aid from the other Clans. Kaiu Haruko designed the new defenses, and planned the logistics needed to build it. The Crab were able to build the wall in 73 Days and finished it in the year 716. The valiant Kuni Osaku was unable to keep the spell going any longer and with her magically accelerated death the water wall she had created dissipated. The army of the Maw charged across the now quiet river to attack the Crab atop their wall but they could not pierce the new defences and were defeated, the Maw was slain and his head taken to be mounted over the gate of Kyuden Hida. The wall had since been expanded repeatedly over the years until it stretched from Razor of the Dawn Castle to the beginning of the Kuni Wastes. [5] [6] [7] The next year three students of Kaiu Haruko began to extend the wall. [8]

The Carpenter Wall was over 100 feet tall with its foundations sinking many 100's of feet beneath the soil. Its battlements were almost 30 feet thick and it was garisoned by 150,000 samurai and stocked with enough rations to feed an entire army for two years. It has strongpoints located at 50 yard intervals, which housed siege engines. Each blockhouse holds one crew for the engine and a further two units of troops numbering 50-100 bushi. Between the strongpoints archers and bushi patrolled. There were also 12 great towers that lined the wall from end to end, [9] the famous Kaiu Towers. [10] The First and Second Crab Armies garrisoned the Wall. [11]

Communications along the wall were handled by Hiruma runners who could sprint a mile before handing their message over to another runner. The system was surprisingly effective and the runners were known as the Falcon's Wings. [9]

Under the wall the Kaiu constructed a bewildering maze of traps and dead ends. All Hiruma Scouts who are about to enter the Shadowlands were provided with a Kaiu guide that led them through the mazes. The Kaiu were very loathe to show outsiders the secrets of these defenses. [12]

In the Month of the Rat of 1128 the defenders of Razor of the Dawn Castle were wiped out by an enormous Shadowlands Horde, which broke through into Rokugan, heading directly for Otosan Uchi, where Fu Leng was possessing Hantei XXXIX's body. [13]

In 1159, in the month of the Horse, [14] Daigotsu ordered an assault on the Kaiu Wall and he used unknown magic to transport a portion of his forces beyond the wall, storming it from both sides successfully. Hida Kuroda, the Crab Clan Champion, faced and was then killed by Kyofu, the Onisu of Fear, below the Carpenter Wall. [15] The Carpenter Wall fell due to the Tsuno magic. Tsuno Soultwisters used the presence of the Onisu to inspire nightmares among the Crab troops, and then used the Crab's nightmares to open a passage between Yume-do and the mortal Realm. This allowed the Onisu to slip past the Wall unnoticed, causing six of the towers of the Kaiu Wall to fall. [16]

At the Battle for the Last Tower, Fu Leng corrupted the sixth of the twelve great towers of the wall. Unable to cleanse the Taint from the tower, it was ordered to be separated from the wall, which was rebuilt to circumvent it. The resulting Tower of Fear stood within view of a considerable portion of the wall, a grim reminder of the consequences of failure. [17]

A tower was built to replace the one that had become tainted. It was known as the Seventh Tower. [18]

Hida Kuon wished the Kaiu Wall to be extended so that in time, the entire Empire might be protected. Construction began in the Valley of Spirits, toward the Unicorn territory. [19]

In 1171, shortly after the end of the War of Dark Fire appeared the first reports of ogres, goblins, and demons fleeing from the Shadowlands. [20] The Wall of Bones had been destroyed when hundreds of creatures were driven out of the depths of the Shadowlands, by something dangerous enough to scare oni. The Kaiu Wall began to suffer daily attacks from the fleeing demons. [21]

Fall of the Wall[edit | edit source]

After the shadowlands beasts stopped their attack, the Destroyers appeared and overwhelmed the exhausted samurai breaching the wall, letting hordes of Destroyers pour into Rokugan. [22]

Layout of Section of Wall 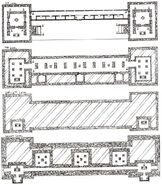 Levels 1-8 of Section of Wall 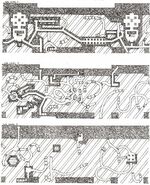 Retrieved from "https://l5r.fandom.com/wiki/Kaiu_Kabe?oldid=285365"
Community content is available under CC-BY-SA unless otherwise noted.